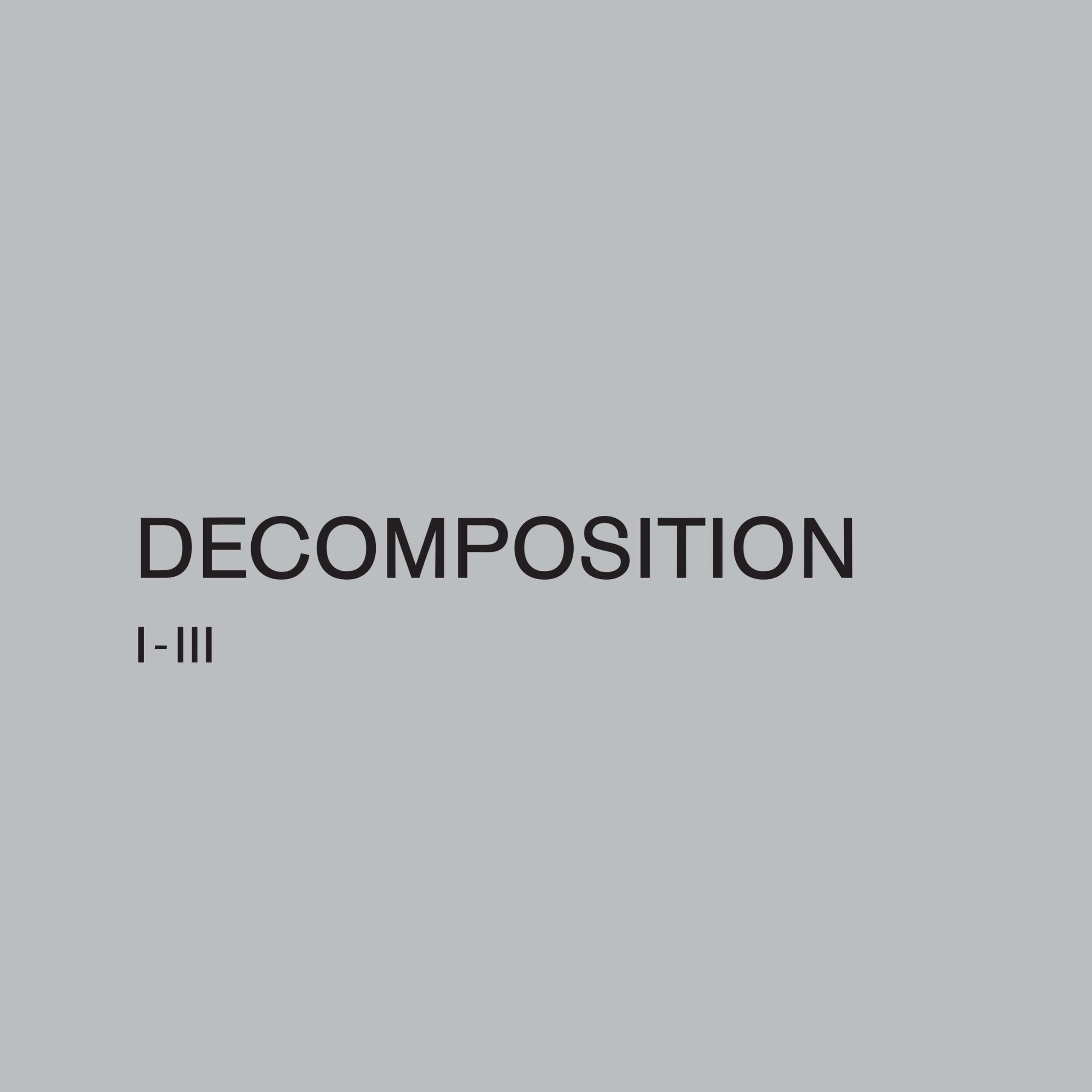 ABSENCE was recorded in the Atacama Desert in Chile during the realization of the A/V composition Desert Sound (2012). Additional recordings by Fernando M. Godoy.

INTROSPECTION was recorded entirely within a glacial crevasse in Hintertux, Austria, as a part of the cinematic project »E# - from a glacial tune« (2013).
The resonance patterns reassemble a variation of Alvin Lucier's concept of
»I am sitting in a room.«

ILLUSION is based on sounds of casinos and electromagnetic fields in Las Vegas (2015). All electromagnetic recordings were done by Christina Kubisch as part of the cinematic project »Illusion«.

DECOMPOSITION I-III is based on a concept by Peter Kutin. Realized, produced, mixed and mastered by Peter Kutin and Florian Kindlinger between 2011 and 2015.
Photography by UMZ, Layout and graphics by Silvia Drum.

The LP production was supported by → SKE Fonds, whilst the other projects received grants from → BKA, → SKE, → MA7 Vienna and the cultural Support of Styria and Salzburg.

»Decomposition – I – III« is a double LP that represents a compositional cycle. This collaboration of Peter Kutin, Florian Kindlinger and Christina Kubisch (in part III) has brought forth a conceptual piece using microphones (recording devices) as versatile instruments.
The Trilogy leads through the themes »Absence«, »Introspection« and »Illusion« and follows a clear dramaturgical path.
A live implementation of light, sound and film has been developed around the aural layer to create a unique and flexible form of presentation, which had it's premiere at the Donaufestival 2015 in Krems. Part III has been re-arranged and was released as a radiophonic version (entitled »desert bloom«) which received the prestigious Karl-Sczuka-Award at Donaueschinger Musiktage in 2016.

As a record this trilogy contains acoustic parables, starting with recordings from the Atacama, the driest desert on earth. »Absence« (part I) presents a piece of abstract, desolate music that hauntingly extends dark and bizarre over two sides of the LP. A brute inferno of noise, recorded inside a Very Large Telescope (VLT) during its calibration, eventually dissolves into the surge of the Pacific Ocean. In between, salt-crystals crack through the sunset, erosion gnaws at empty mining villages, nature plays with leftovers of civilisation and the wind blows through neglected cemeteries and copper mines. In this overture, Kutin and Kindlinger emphasise a strict documentary approach: the individual recordings are unaltered and raw.

The second part – »Introspection« was realised directly inside a glacial crevasse on 3200 meter height in Austria. It starts with a harsh walk over a snowy field, suddenly collapsing into silence. One is thrown into the deep seclusion of a glacial crevasse whose inherent resonances slowly build up – following the concept of Alvin Luciers »I am sitting in a room«. Feeding a loudspeaker with the re-recordings back several times, the crevasse becomes a resonator, a drone generator that amplifies it's own wavelengths. This is successively getting more and more intense with every re-recording that gets played back through the speaker. The piece documents this process of transferring the clear 'room-tone' into a resonating echo-chamber. An acoustic freeze happens and was entirely recorded inside this cold and dark crevasse.

»Illusion«, the final part, is about artificial light and was realised in Las Vegas in cooperation with German sound artist Christina Kubisch. Kubisch recorded electromagnetic signals of various light sources all over the city, creating an archive of various electromagnetic-sounds that normally remain undetected by our auditive perception. Usually we only see light and don't think about its sound. Kubisch uses extensions for her ears, specially developed headphones that translate electro-smog directly into audible signals. Later on Kutin arranged the piece in his studio in an orchestral manner. The city has been used as a big modular-synthesizer, whose sounds are the foundation of this opulent work. Still the piece follows the trilogy's inherent documentary path, by again detecting a (hidden) layer of our reality and using it as material.